xplorersclub
posted on 1 year ago — updated on 1 second ago
550
views
The ruins of an Estonian prison are drowning in the quarry lake where the convicts were once forced to work.

Diving along the main building. 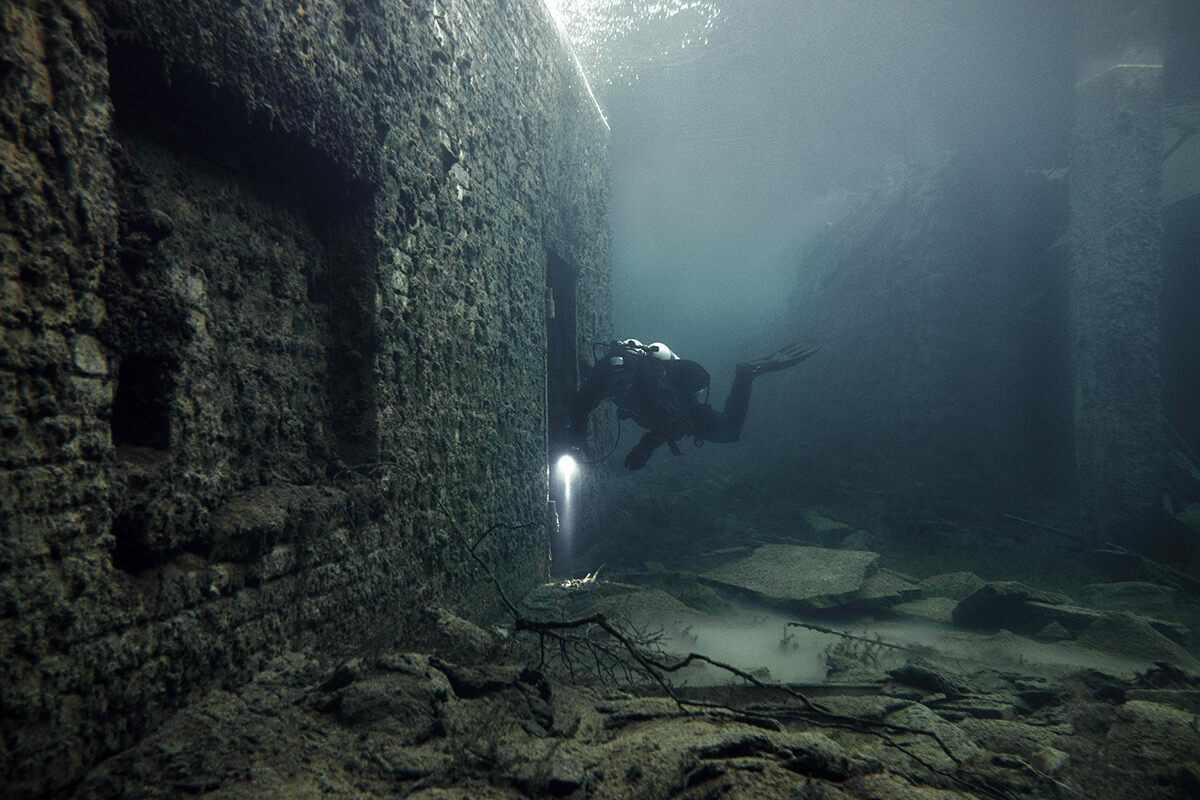 Finnish explorers Tanja Palmunen and Kimmo Parhiala  also known as Abandoned Nordic, for the past two and a half years have been traveling across Northern Europe to find and photograph abandoned houses, cars, casinos, churches, etc.
In this case they came across  an underwater prison, often in the dead of winter.

The Prison is situated in the middle of a submerged quarry.

“The Rummu lake is a shallow lake, with an average depth of 6 to 10 meters. This means that we can stay down longer without worrying about decompression sickness,” says Parhiala.

The risk is from diving on icy water during winter months. In Winter the water temperature drops to around 3 to 4 degrees Celsius. In these temperatures, they use a isolated drysuit. Still, after a while, the bodies can’t cope with the cold water and it feels cold, really cold.

The view from a hill close by. 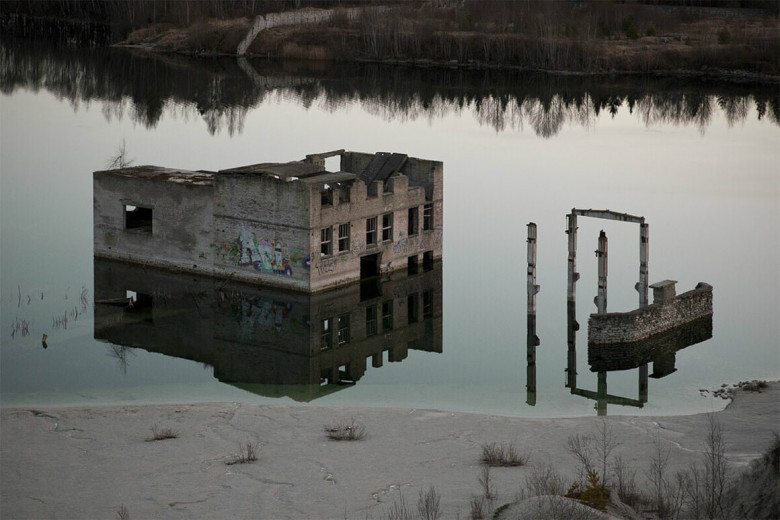 The prison—originally known as Murru—was established in the late 1930s, although the first prison cell wasn’t constructed until 1949. It wasn’t meant to be in the middle of a lake, the location was at a limestone quarry, where inmates were forced to work. Following the collapse of the USSR, the entire base was abandoned. Groundwater, which was used in local farms, soon flooded the quarry, creating a mostly submerged island of crumbling brick walls.

The main building, from above the surface. 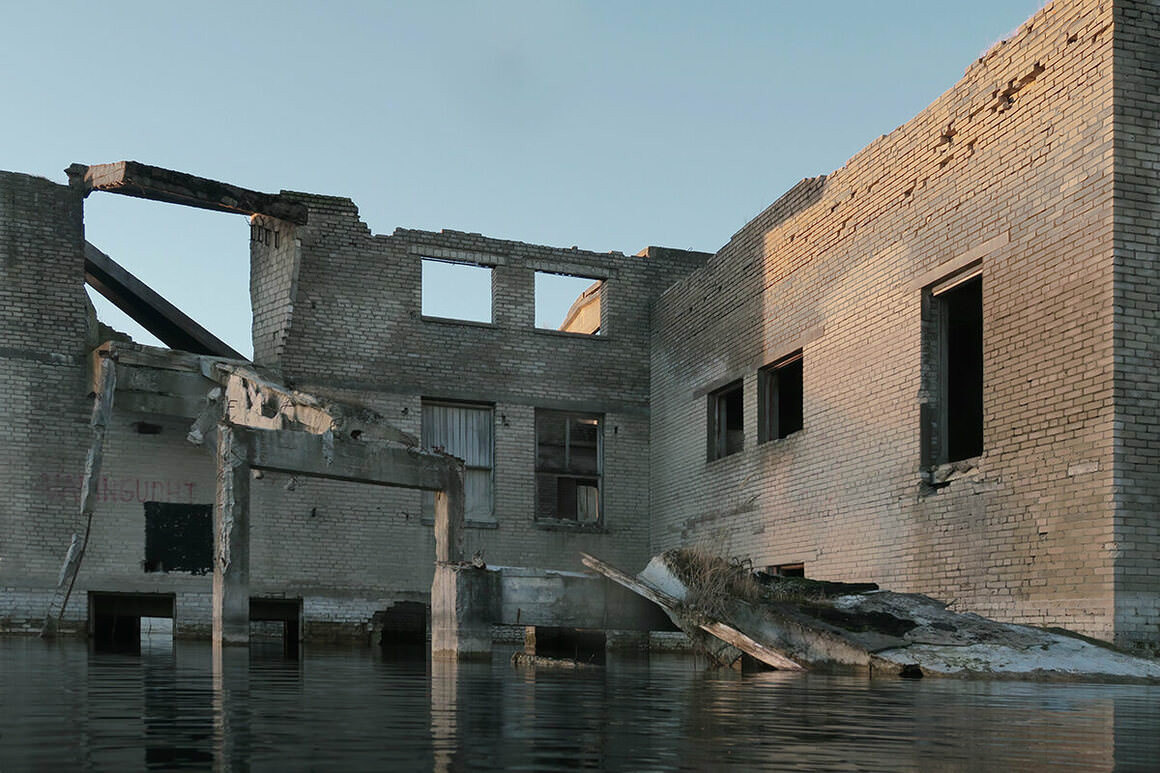 For their dive, the visibility was good,  Palmunen and Parhiala found the water to be very cold and excatly what you might expect from an Estonian winter.

“The cold shivered my lips when we began our descent toward the underwater parts of the main building,” recalls Parhiala.

Diving into submerged buildings in the lake was particularly tricky for our explorers.

“You have to adjust the camera settings and keep your focus on your buoyancy, so you don’t touch the bottom and screw up the visibility, and also that you don’t ascend to the surface.”

Above the water, the walls fare visible, but underneath is a different view.

“Next to the main buildings, a diver can visit other buildings, which are completely immersed,” says Parhiala.

“These large buildings with many rooms are covered in green moss and debris. In addition, a diver can visit the old underwater walls with lamps still intact. It is an odd sensation to imagine the inmates figuring out if they could climb over the walls. Now, we can just hover over them without any resistance.”

The Abandoned Nordic team moved slowly through the prison, pausing for photo and admiring the site.

“Bars in the windows reminded us about the history of the place. Like many other abandoned buildings in Estonia, this one was made out of cheap gray bricks which were laying around everywhere on the bottom. Inside this weird underwater building, we watched our exhale bubbles hit the ceiling and enjoyed a break from the sensation of ordinary gravity.” 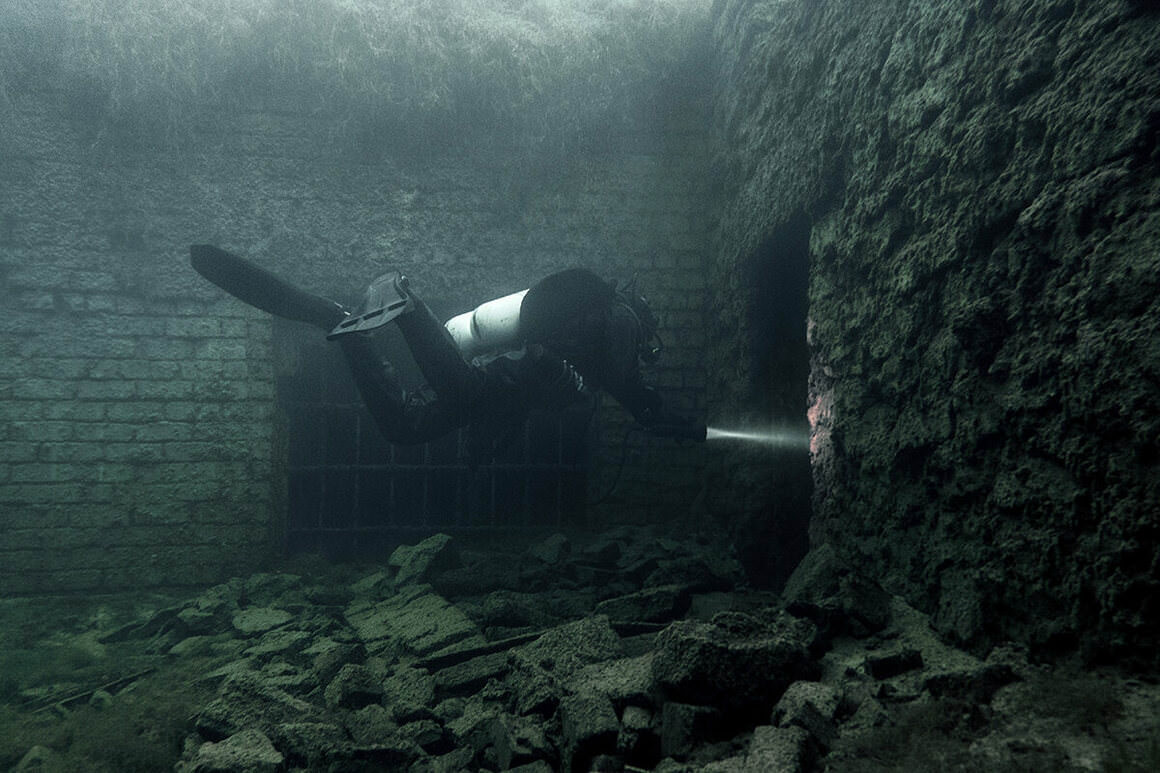 Descending along underwater stairs, next to the underwater guard fence. 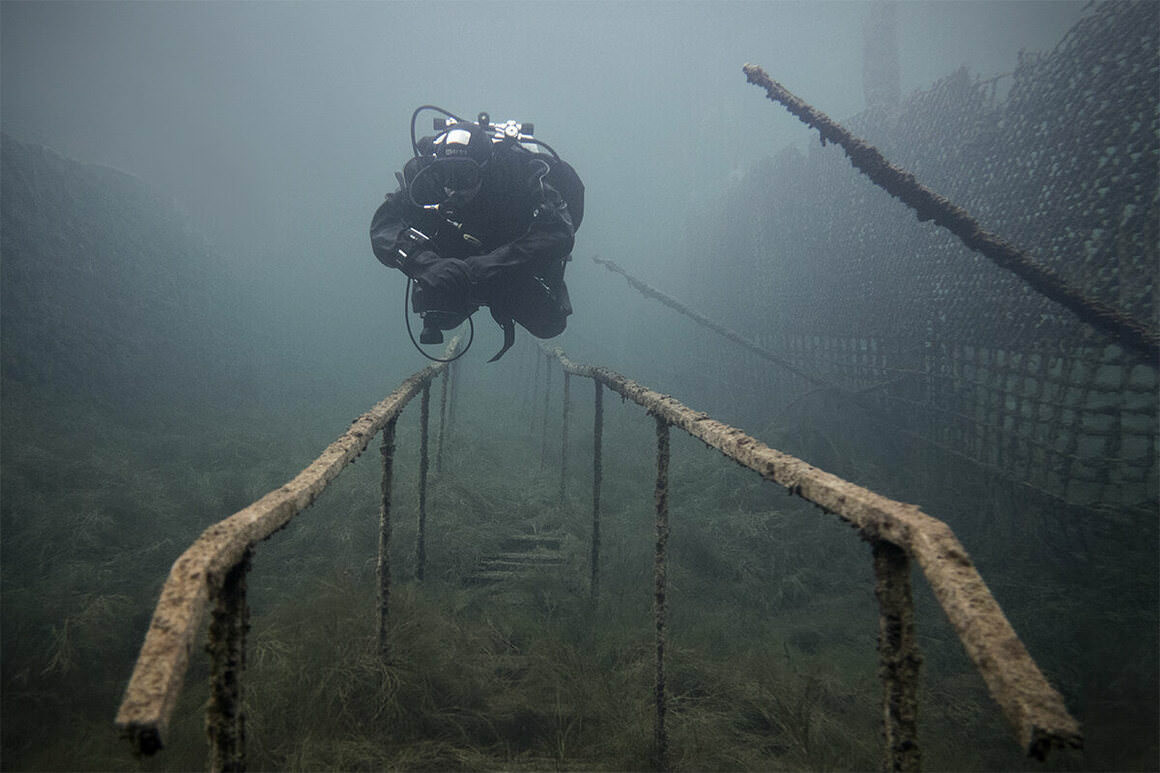 A collapsed part of the main building, diving close to surface. 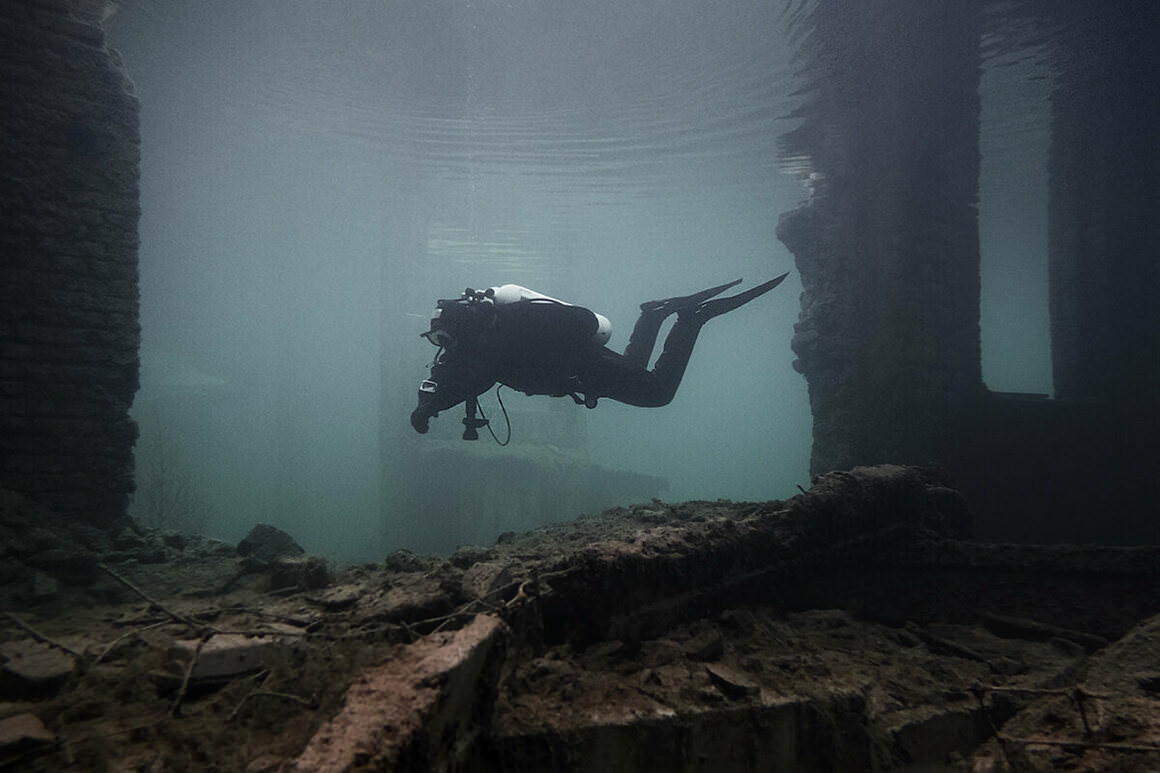 Bars are still visible in some of the windows. 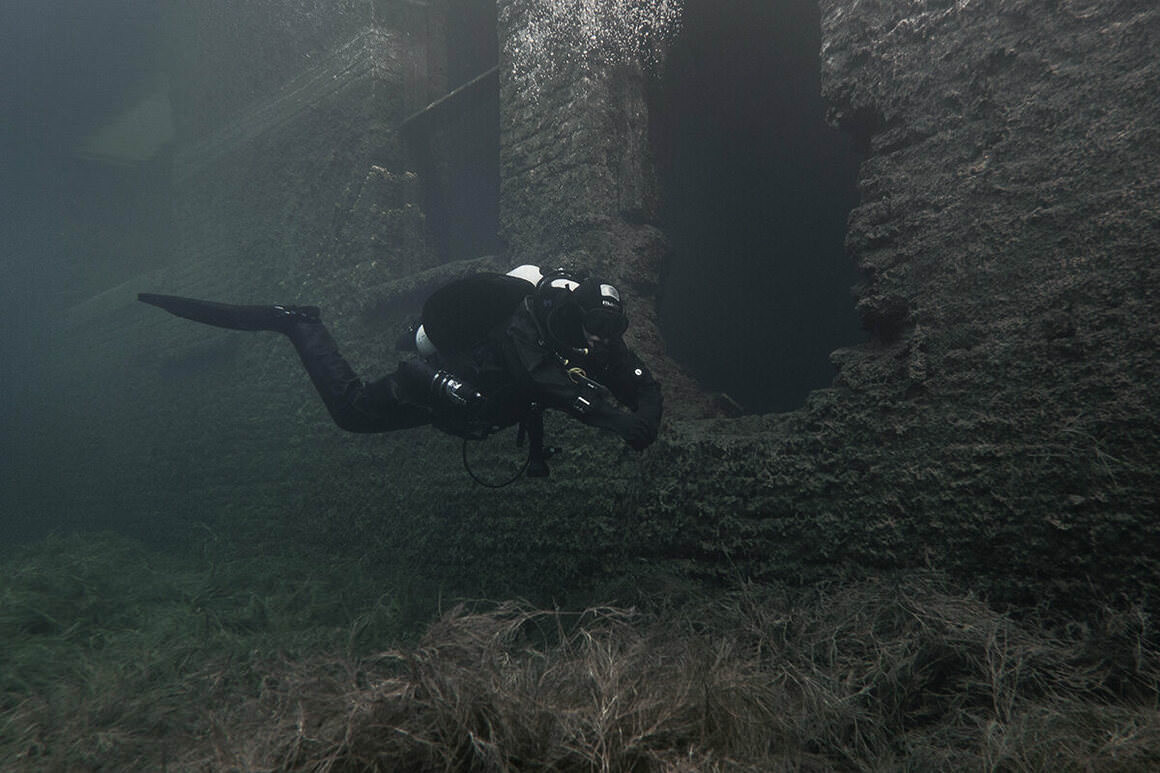 Ruins of Rummu buildings above the shoreline. 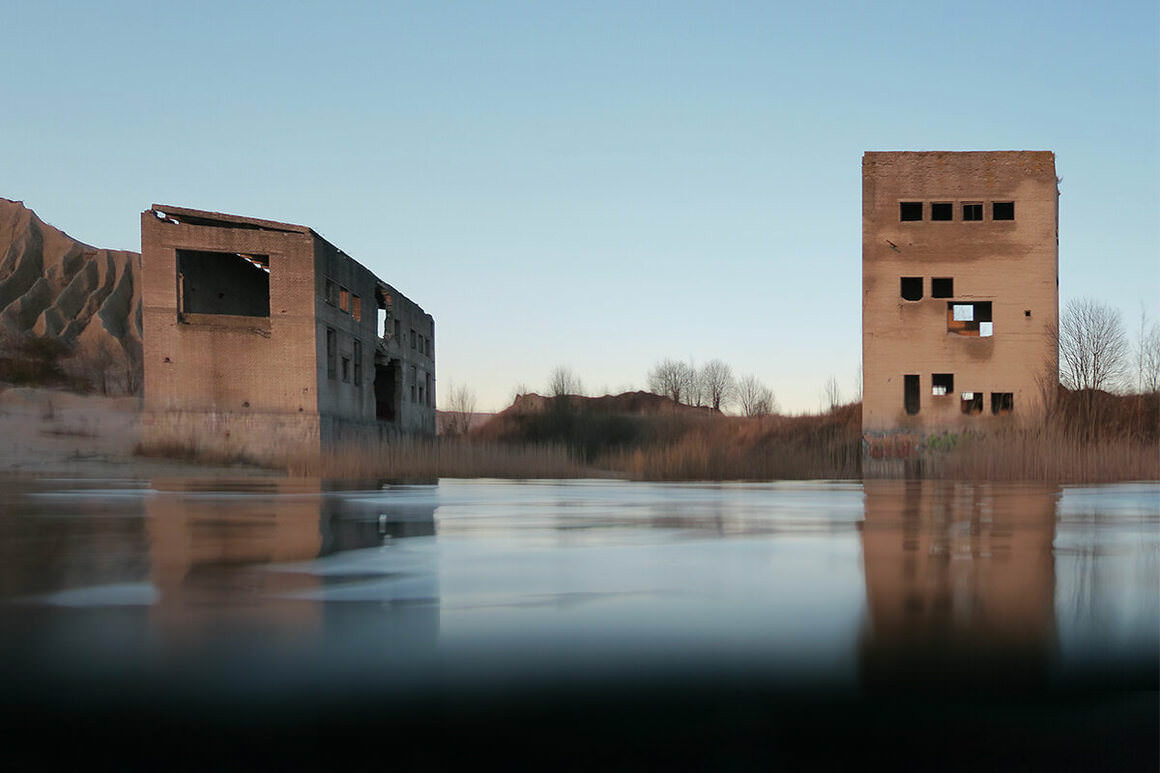 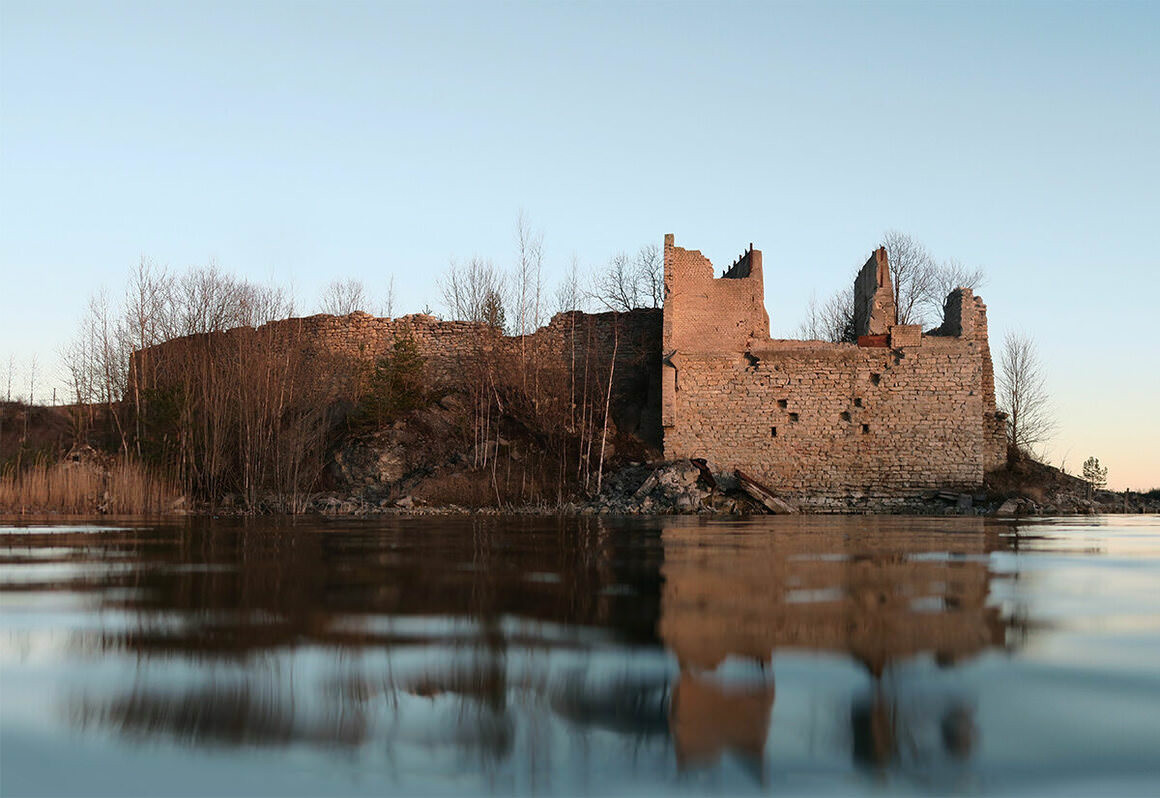