xplorersclub
posted on 3 years ago — updated on 1 second ago
287
views
Located in the Bering Sea this island is about 1.6 kilometers wide and is built in an extreme territory with rocks and slopes.

It was first discovered by a European explorer and named after one of the members in his party, Lt James King. (Kings Island)

For a very long time, the community of Inupiat Eskimos who considered themselves as Aseuluk, which means “people of the sea” lived in the Kings Island. Their population was about 200 people and mostly the village there, named Ukivok, was used mostly as a winter home by the Eskimos.The main activities for survival was hunting animals like seals, fishing in the ice and food gathering in the area around there. 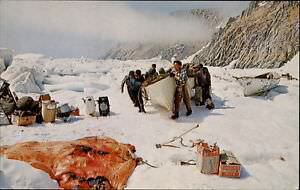 The history says that the reason why the village eventually became abandoned is that in the mid 1900s the school closed and that lead to the kids moving into the mainland of Alaska. After the kids left, in the village were left only old people and they couldn’t gather food all by themselves so they had to leave to mainland Alaska for survival.

Until this day the village remains empty and abandoned…